There is no frigate like a book
To take us lands away,
Nor any coursers like a page
Of prancing poetry.
~ Emily Dickinson

Literature is my Utopia. Here I am not disenfranchised. No barrier of the senses shuts me out from the sweet, gracious discourses of my book friends. They talk to me without embarrassment or awkwardness. ~ Helen Keller

Jane Austen's Philosophy of the Virtues (2): Propriety's Claims on Prudence

In the second chapter of Jane Austen's Philosophy of the Virtues, Emsley discusses virtue in Austen's early works - Northanger Abbey and Lady Susan. Of course, any good Janeite will be quick to point out that the eponymous heroine of Lady Susan is entirely without virtue - possessed of the kind of shocking amorality that in later novels Austen is hesitant to assign even to the rakes. However, Lady Susan makes a great show of propriety -- leaving the Manwarings' house, or being a model of feminine reserve to Reginald DeCourcy - to cover her selfishness and immorality. Emsley points out the ghastly degree of Lady Susan's immorality when she encourages her friend Alicia to bring on the death of the feeble Mrs Manwearing "through irritating her feelings".

Feminist critics have sometimes viewed LS as Austen's exploration of female power, a theme patriarchal influences forced her to discontinue pursuing in her later works. Emsey agrees "that Lady Susan criticizes female power," but posits "the heroine's pursuit of virtue in [the] later novels as a quest for a different kind of power. Given that older definitions of virtue (or vertu) had to do with strength and power, it is important to emphasize that the virtues are moral excellences, and therefore may be seen as more powerful than aggression or manipulation" (48).


Lady Susan is an inherently amoral character who uses propriety to cover her villainy. In contrast, Emsley views Catherine Morland of NA as an innately virtuous heroine, who must learn the proprieties of society. For example, Catherine would consider it a sacrifice to ride with the Thorpes rather than walk with the Tilneys. In contrast to George Eliot who once stated that "All self-sacrifice is good", in this instance Austen upholds the propriety of following through with the first engagement. For Austen "the morality of sacrifice depends on what the sacrifice is for... In Northanger Abbey... Austen tests sacrifice against loyalty, honesty against propriety, and authority against natural inclination" (54). 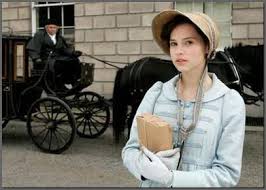 While I agree with the analysis of Catherine's innate sense of honesty as vital to her actions and character, I think there may be room for a little more exploration of her terrible surmises and consequent moment of shame. This chapter is Emsley's weakest (though I'd still give it an A), probably because it deals with works Austen wrote at a young age. Among Austen's ouvre, NA seems most influenced by contemporary sentimental novels and Emsley acknowledges that "later Austen heroines will have to think more, struggle more, and suffer for more than ten minutes or one dark night in a scary room" (55).   Emsley's analysis focuses primarily on a couple of Catherine's interactions with the Thorpes and Tilneys in Bath, without exploring the gothic elements introduced at the Abbey. Although something of an off-shoot from discussing specific virtues, the exploration might be expanded by a look into the moral implications of imagination and sentimentality.

Despite its slimness, this chapter also provides some fabulous incites into Austen's originality. For example, "That villains can be ordinary people is radical, just as the idea that heroines can be ordinary people is radical" (55). That's why NA is another wonderful examplar of Austen's lessons for us today. Today in my ordinariness, I can be a heroine. Like Catherine I can acknowledge my mistakes and then take comfort in Austen's declaration, "She had nothing to do but to forgive herself and be happier than ever."

Which Janeite school(s) do you adhere to?