There is no frigate like a book
To take us lands away,
Nor any coursers like a page
Of prancing poetry.
~ Emily Dickinson

Literature is my Utopia. Here I am not disenfranchised. No barrier of the senses shuts me out from the sweet, gracious discourses of my book friends. They talk to me without embarrassment or awkwardness. ~ Helen Keller

Jane Austen's Philosophy of the Virtues (3) Sense and Sensibility 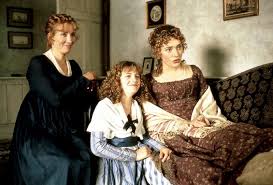 Sense and Sensibility, Sarah Emsley posits, is about social virtues in tension with the virtue of honesty. Who among us can't think of some uncomfortable situation when we have been forced to speak, knowing honesty might wound? Emsley describes this problem thus: "In loving one's neighbor there is an inherent tension between respect and affirmation; that is, it is difficult to draw the line between being polite and sympathetic to someone, and being complicit with that person's behavior" (59). This is certainly true in S&S, in which it seems as if the Dashwood sisters are surrounded by the most vulgar, villainous, or cloying people imaginable. A balance must be struck through sympathy tempered by judgment.

Kind and friendly behavior is referred to in Austen's novels as amiability. Like the other virtues, it is a mean, with faults lying at both extremes. "The excess of amiability is obsequiousness... and the defect is cantankerousness" (62); S&S certainly has its share of characters - from Lucy Steele to Mrs Ferrars - falling on either side. In discussing the qualities of friendship and social life, Emsley brought my attention to a description of the Middletons that will now make me momentarily abandon my essay tone: "Continual engagements at home and abroad... supplied all the deficiencies of nature and education." Sorry if this is mean, but to me that's an exact representation of the Middleton family who feature so much in gossip columns today. ;)

Emsley goes on to discuss whether virtue is best formed in contact with the world, or in isolation from it. In exploring this question she returns to the theologians à Kempis and Augustine who advocated separation from the world, but acknowledged that the monastic life is not for all. She then turns to "Areopagitica", concluding that Austen agrees with Milton that "knowledge and survey of vice... [are] necessary to the constituing of virtue." Austen demonstrates this belief in a number of ways. Elinor speaks to Colonel Brandon of Marianne's need for a "better acquaintance with the world".  Edward states that his foolish engagement to Lucy was the "consequence of ignorance of the world". This need for knowledge is, however, balanced by the conclusion "the world [has] made [Willoughby] extravagant and vain". Knowledge, therefore, is necessary to the formation of good judgment in the young, but utter license is destructive to their character.

One of my favorite insights in this chapter involves how Austen signals out Willoughby's seduction of Eliza Williams as the "origin" of all his other crimes. Emsley points out how "this is in contrast to [David] Hume's theory that a man's virtue can be more easily redeemed. Thus Austen's fiction might be seen as opposing Hume's double standard of virtue" (60).

Another striking, though simple, insight was the presentation of the virtues as a chain. "Self-knowledge may bring us to understand our faults, knowledge of how we have injured others may bring us to exert ourselves...[,] and the constant discipline... requires courage" (74). This idea of virtues that "cause and affect each other" (74) reminded me of 2 Peter 1. Perhaps that text is especially significant in the light of the foundation of religion in Austen's worldview: "Add to your faith virtue."


One thing I question is Emsley's conclusion that, unlike Marianne, Elinor is not "prepared to ask for divine grace" (81). Although it is true she does not do so as explicitly as Marianne, could it be because Marianne has "sinned" more publicly? To what degree must confession be public? (Emsley uses the term penance in referring to Marianne's behavior. Could this be a Catholic element in Austen, or is this merely part of Marianne's tendency to extremes?) These questions are very interesting, when we consider the fact that three heroines (Marianne, Elizabeth, and Elinor) experience identifiable times of repentance, while the less hasty heroines (Elinor, Fanny, and Anne) seem to have little for which to repent. Emsley explores these differences further in the following chapters, especially relating to Fanny, but perhaps part of the answer lies in a quote she cites from Alastair Duckworth suggesting that Elinor "does not so much evince a moral growth as a constant internal moral struggle" ("The Improvement of the Estates" 114).

This moral struggle remains in evidence as Emsley ends her discussion of the tension between honesty and amiability. She concludes that "by behaving civilly to other people, Elinor is closer to practicing the virtues than Marianne, because a virtue is no longer a virtue when the practice of it is unjustly harmful to others" (71).

Which Janeite school(s) do you adhere to?